Probiotics are the ‘good’ bacteria.

They are naturally found in the gut and are vital to our health.

Probiotics are broadly defined as live microorganisms that provide health benefits to their host (eg, people) when taken in adequate amount/quantity.7 These organisms are often found in your body, food, or other supplements and are classified as “good” bacteria. When most people hear the word “bacteria,” they think of infection or disease. However, good bacteria such as probiotics provide protection against other harmful bacteria and promote a healthy digestive system. In fact, a normal human digestive tract contains about 500–1000 strains of probiotic bacteria that work to defend vital bodily systems.

Probiotics play an essential role in promoting overall health. The benefits of probiotic bacteria include:

“Probiotics are live microorganisms, which, when administered in adequate amounts, confer a health benefit on the host.”7

Probiotic supplements are gaining in popularity

While probiotics and probiotic foods have been marketed for decades in Europe and Asia, they have only recently become popular in the United States. They are most likely to be found in supplements or in dairy products such as yogurt or fermented drinks. Probiotics have been heavily promoted for their health benefits over the past several years.

However, pasteurization kills probiotic microorganisms. So, live probiotics must be added to dairy products after they are pasteurized. But, there is one more hurdle to clear: the stomach. Probiotics in foods such as yogurt deteriorate when they come in contact with the acids in the stomach. As a result, by the time they reach the intestine, the number of live probiotics is markedly reduced. That’s why specially designed probiotics are important, such as Renadyl™, which has a special capsule coating that protects the probiotic microorganisms as they pass through the stomach, allowing them to reach the colon intact. As the promise of probiotics continues to emerge, scientists have begun focusing on the role of probiotic bacteria to aid digestion, boost natural defenses, and fight bacteria that could cause health problems. “For my patients, Renadyl™ has improved their quality of life. It’s improved their numbers, it’s made them feel better and I believe it’s also helping other markers of total body health: lower uric acid, helping with gout, help lower high blood pressure.”
- Dr. Richard Snyder
(D.O., Nephrology)
How Renadyl™ helps with its Proprietary Probiotics
Renadyl™ is a patented and proprietary probiotics dietary supplement that has been scientifically formulated and clinically tested. Renadyl™ metabolizes nitrogenous waste that has diffused from the bloodstream into the bowel. Nitrogenous wastes are utilized by Renadyl™ as nutrients. As probiotics grow and multiply, they consume more nitrogenous waste and therefore effectively help maintain healthy kidney function. The nitrogenous metabolites are eliminated as solid waste/fecal matter. 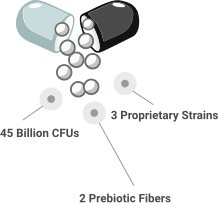 Every Capsule of Renadyl™ contains..
45 Billion CFUs
High concentration of probiotic microbes aka Colony-forming Units (CFUs)
2 Prebiotic Fibers
to promote the growth of the probiotics found in Renadyl™ and your own beneficial gut microbes.
3 Proprietary Strains
of helpful Bacteria selected by science for their ability to metabolize nitrogenous waste.